data-url=””
data-via=”centreumc”
data-text=””
data-count=”vertical”>Tweet
Divorce is a difficult topic in our modern era. All of us know someone who is divorced. Most of us probably know someone whose divorce ended a painful or even abusive marriage. And it is telling that so much energy is spent fighting over gay marriage, on which Jesus never said a word—on which Jesus couldn’t have possibly said a word—and so little attention given to divorce, on which Jesus speaks very clearly. It might be helpful to remember, though, that speaking against divorce in Jesus’ day was no easier than it is in our own; John the Baptist, after all, was executed for criticizing the divorces and remarriages of King Herod’s family.

In the New Testament, marriage is never just about a state of affairs between a man and a woman, or even just about a state of affairs between a woman, a man, and God. Marriage is also an image, a metaphor, for the relationship between Christ and the church. We, the church, are Christ’s bride, and Christ is our bridegroom. And the unity that we share with each other in Christ is a sacred bond, so the words Jesus gives in reply to the Pharisees’ test in this morning’s reading from Mark are, no doubt, just as much intended for the church as they are for any human marriage: “what God has joined together, let no one separate.”

You have heard those words from Jesus today, and today, of all days, you should be scandalized by them. Today is World Communion Sunday. It is a day when we celebrate the gifts and diversity of the global church. Christians all over the world are celebrating this day, joining our hearts in shared prayers of thanksgiving at Holy Communion.

But the sad truth is that these prayers are being said at tables where walls still exist that divide us from each other. Today is World Communion Sunday, but there are churches today where you and I would not be welcome to share in Communion, and our church remains a place where some Christians would not share in Communion with us this morning. There are, naturally, many reasons for this situation: differences in doctrine, historical events, and human stubbornness. There are always reasons for divorce.

Things have not always been like this. For the first thousand years or so, the church mostly managed to avoid divorce, or schism. That’s not to say there were no problems or that everyone got along all the time. There were even a few points when groups walked out on each other, when fingers pointed at everyone else and tried to assign blame, but these usually were overcome. Then, in the eleventh century, the first major rupture happened, dividing the church between East and West. This Great Divorce was so awful and so painful that it took another thousand years for real healing to begin, and even today efforts at reconciliation are not finished.

In the East, this divorce was a one-time event, but in the West it marked the beginning of many more marital splits. There were splits in the 1500s, during the Reformation, with Martin Luther, and John Calvin, and the Church of England all struggling with crises within the church, at a time when it seemed that others within the church were only too happy to let them walk out. And once they did walk out, forced to leave in some cases, it wasn’t too long before their own followers found stronger reasons to leave than to stay with each other.

In England, in the early days, we Methodists tried hard not to fall into the divorce trap of denominations. Charles Wesley insisted that Methodists remain faithful to the Church of England. John Wesley embraced what he called a “Catholic Spirit,” trying to find unity with other Christians wherever he could. But once Methodism landed on American shores, it was only a short time before we also caught the divorce bug. Historian Russ Ritchey says that in the late 1700s and throughout the 1800s Methodists practiced “addition by division.” Every time we had a disagreement, we divided, and when we divided, it seemed that both sides of the division prospered.

And so in the church we became used to the idea that if you have a problem, you can just leave. Don’t like something the pastor said this week? Adios. Find a church where the preaching won’t make you uncomfortable. Angry that someone sat in your pew? Au revoir. Go claim a pew in another church building. Feel like your voice isn’t being heard? Auf wieder sehen. Swim in a smaller pond—or better yet, start your own church, so that your voice can have the place of pride it deserves.

We have become complacent about divorce in the church. We do not treat it seriously enough. Some of us even like the idea that we can leave whenever we want. And I think it’s fair to say that one of the reasons divorce in marriages between a man and a woman has become so normal is because we have accepted that leaving your church is not that big a deal.

So Jesus’ words today should scandalize us. They are an affront, an assault, on how we do church, on how Christians have done church for centuries. There is no wiggle room in his response to the Pharisees, no escape clause in his clarification to the disciples. Divorce is for hard hearts, not for lovers of the bridegroom. So before we start wagging our fingers about the speck in the eyes of those who go through the trauma of personal divorce, we need to do something about the log of churchly divorce blinding our own eyes.

Celebrating World Communion Sunday is a start; if we cannot join other Christians in the flesh at Christ’s table, at least we can be with them in the Spirit. But we need more, and that more is called ecumenism. Ecumenism, or the ecumenical movement, is when members of the different divisions of the body of Christ reach across the scars of our divorces and work together. Ecumenism brings healing and reconciliation, which are the only things that will overcome our fissures.

Ecumenism happens when Christians worship together, when we pray together, when we work together, and when our leaders talk together. It needs to happen at the personal level, but that’s not enough. Entire denominations need to be involved, at all levels—and I’m happy to report that The United Methodist Church is an active member of the ecumenical movement. And congregations, as a whole, must also be working together with other congregations for the sake of ecumenism. How can Centre partner with our Episcopal, Lutheran, Catholic, Presbyterian, and non-denominational brothers and sisters?

The best sermon I ever heard on this passage from Mark 10 was by a dear friend and mentor who himself had been divorced and had remarried. As a member of a divorced church, I want to pass along to you what he said years ago: Divorce happens because at some point our love fails, because our human love sometimes reaches a point where it says, “I can go no further.” But God’s love is not like that; in Jesus Christ there is no point that is too far for God’s love to reach, no place where God’s love will not go. God’s love will never divorce us; God will never walk out on us or throw us out. God’s love is so beautiful, binds so strongly, that in Jesus Christ God can even overcome the messy brokenness of our own divorces. And it is on God’s love alone that our hope for ourselves, our marriages, and our church can rest secure. 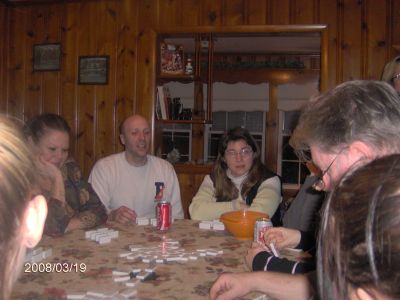